Out in the cold clear water of the St. Lawrence can be found the Magdalen Islands, blessed with sublime beauty and the best lobster in the world. They are a little known gem and a must visit for anyone with an artistic eye and a taste for great seafood.

It was floating in the surf that gave me my best view of Les Iles de la Madeleine.
I had just finished “L’excursion dans les Grottes”, body surfing through the caves along the cliffs. Before we began, our group instructor, Claude Boudrias, had us hold hands in a ring while he demonstrated how to right ourselves if tipped by the waves, and had outlined a zen-like game plan for enjoying the cave surfing expedition.
“Always let the sea take you,” Claude had said. “If

a big wave comes, don’t fight it. Submit to the sea and she will protect you.” He had been right.
With a full wet suit to protect against the cold June water temperatures, all that had been required of me was to wait for the right wave. The crest then propelled me through the seven caves like a cork, sometimes to a sandy grotto, sometimes back out again through an exit channel.
Then, after having passed through the caves, I paddled around until I faced the coast, and there it was – a perfect view of the iles at their best.
To the right were the red cliffs of the bluff, topped with green marram grass, and ringed with caves and blue and white surf. To the left, in a small bay, was a white sand beach, totally deserted. Straight ahead were gently rolling green hills with one citron yellow clapboard house glowing in the centre.
And overhead, a big windswept sky.
It was a scene that could have been coloured with a child’s crayons. It is that brilliant light and pure colour that has made the islands a Mecca for photographers and painters. But there is more to the islands than beauty. The water sports, the food, the artisans and the friendliness of the islanders, have also wooed visitors.
Walking the twenty minutes to the caving excursion had given me time to question our instructor, Claude, about how he came to the islands.

“About five years ago, I fell in love with a girl from the islands and moved here to be with her. I’m still here. Lost the girl. Kept the islands.”
And then he added, “There’s magic here.”


If You Go:
For general information about the islands, visit http://www.tourismeilesdelamadeleine.com/, or call 1-877-624-4437. While the majority of the islanders speak French as their first language, most are bilingual.
When To Visit: July and August are busy months on the islands. Best times to visit are in June, when the weather is mild and the lobster is in season, or September, when the temperatures remain pleasant and the rhythm of the islands is more sedate. In winter, there are also helicopter excursions onto the ice to observe the seals. Shoulder season and off season prices are very reasonable.
Getting There:
By Air: Partners of the major national airlines make several daily flights to the islands. Air Canada runs flights from Toronto to Quebec City, with a connecting flight which stops briefly in Gaspe before continuing on to the Iles de la Madeleine.
By Sea and Car: Ferry services run between the Iles de la Madeleine and Sourie, Prince Edward Island. It’s a five hour trip, and several crossings take place every day during the summer. Reservations are recommended for the months of July and August.
Ferry Cruise on the St. Lawrence: From mid-May until mid-October, the ferry M.V. CTMA Vacancier sails from Montreal to the Iles de la Madeleine, with stops in Quebec City, and Matane. Part car ferry, part cruise ship, the rooms are basic, but the dining room is attractive and there is nightly entertainment, a work out room, and wonderful views of the Gaspe and the St. Lawrence. For details, visit: http://www.cyma.ca/

Welcome To The Home of Great Travel 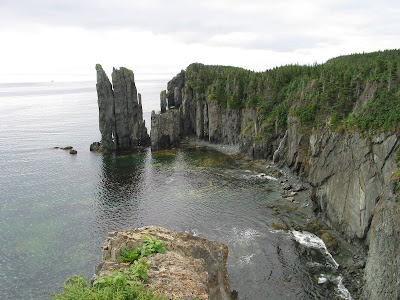 Upper End Travel is dedicated to the search for truly great travel experiences, not necessarily the most expensive, but the ones most worth having.
Posted by Unknown at 3:05 PM 2 comments: