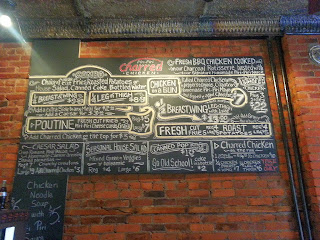 It is always a pleasure to find a place that is wise enough to choose one thing and do it exceptionally well. Charred is one of those places.  This tiny and intimate little central Hamilton resto does chicken, - charred on a charcoal rostisserie and served with homemade piri-piri sauce.
They do several different riffs on the charred chicken theme - one of the best is the poutine - fresh cut fries, homemade piri piri cheese curds and gravy. Add charred chicken on top and this is a filling and delicious dish. (Regular $5; large $7; charred chicken on top, $3) 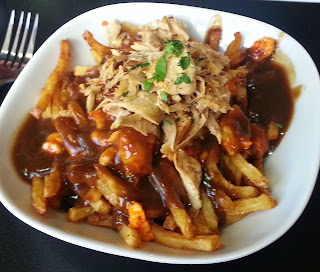 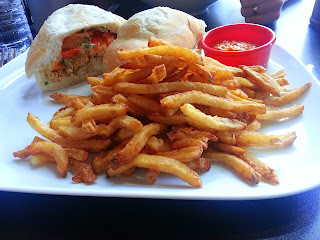 There's also chicken to take out, as well as fresh salads and roasted potatoes.
And that's about it - simple, delicious and really well done.
The space is also unpretentiously simple, with reclaimed brick walls, some local art, and tables in the window that give a clear view of the action on James Street. 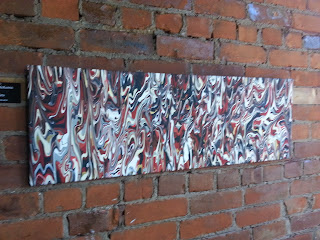 Charred is an attractive place for a casual lunch for those who love BBQ chicken and piri piri.  It's another good excuse to hang out on James Street North. 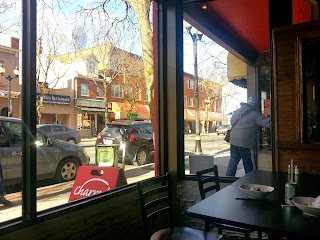 River Cruising: A Room with a (Constantly Changing ) View


A Room With a View:  River Cruising on Avalon’s Panorama

The world’s most expensive book, in the Gutenburg Museum in Mainz, an historic mustard factory in Cochem, an underground disco in an abandoned subway station in Frankfurt, and a mechanical monkey that plays the violin in the Mechanical Instrument Museum in Rüdesheim,  – all are intriguing discoveries to be made on a Rhine and Moselle River cruise.
But even more attractive than that is the discovery that you can open the curtains in your new stateroom on board the Panorama and watch the castles drift by at 6:30 in the morning, still in your PJ’s if you like.  That’s the kind of sybaritic extension to the day that I can’t resist.
It’s not that I’m lazy – the rest of my day will be active and full, but the possibility of starting the day like this, with the window open to the fresh river air, and a cup of coffee from the cappuccino machine in the club lounge is so appealing.
I’m not alone.  River cruising on ships like the Panorama is part of a growing demand from seasoned, and beginner, cruisers.
When Lisa Wilkinson, popular Australian media and television star, christened the Panorama, she was naming a boat that was already a success story.  Even before the ship’s official touring season began with its first passengers coming on board in the spring of 2011, the first season of the Panorama was 98% booked
According to CLIA (Cruise Lines International Association) the cruise industry is the fastest growing travel segment in the world, and river cruising has had a compounded increase of 10% a year since 2004.
So popular are the river cruises that Avalon's sister ships the Vista and the Visionary, have been added to the fleet.

The growth in river cruising is partly the result of a general increase in the number of people cruising, but is also due to the advances in design and upgraded amenities on the newer ships.  Instead of the dark and small cabins of early river boats, as on the first river cruise I took in the early 90’s, new river boats have adopted many of the features of their larger ocean-going sisters.
The new Panorama boasts some of the largest cabins in the industry, at 200 square feet, with full length floor to ceiling windows that open to French balconies, marble clad bathrooms, L’Ocittaine amenities, wifi throughout the ship, a full fitness centre, larger viewing deck and elegant gourmet dining.  Wine and beer are included, as are excursions, guided walking tours and state-of-the-art digital earphones.  The Avalon fleet has some of the youngest ships in the industry.  Although the company only started in 2004, it has already retired two ships, and  expanded to eleven ships in 2012.
The charm of the river cruise, though, remains in its ability to give its passengers close and intimate connection with the countries they visit.  Shore excursions offer more time ashore, with a variety of excursions and an emphasis on the local culture. This all comes with the convenience of a cruise, one time unpacking, your own comfortable room, all inclusive meals and access to the ship-board amenities.

Avalon’s 2014 itineraries range from European river cruises to Yangtze and Nile sailings to Galapagos expeditions, and new itineraries on the Mekong River in Vietnam.

All good reasons to take to the river this cruising season.

A Royal Stay in Ireland

Play The Princess at An Irish Country Estate: Ballyfin

I think every old house has a ghost.
The owners don’t always admit to having hangers-on from the other side, and perhaps they are only vestigially aware of sharing space with a spirit. But open your inner eye when you visit a much-lived-in space, and you may find that there’s a shadow in the room that isn’t yours.
I sensed another presence as I lay in a cloud of bubbles in the deep tub in the Butler Room’s rococo bathroom at Ballyfin.  The soap was handmade and redolent with roses and sandalwood, the water was warm and I had had a long day in chilly weather. But just as my lids lowered in bliss, the door to the bathroom whispered open and there he was, -James Butler, the Duke of Ormond.

He was still wearing his armour and battle regalia from his successful leadership of the Irish Loyalists during the mid seventeenth century. His regard was regal, disdainful perhaps, but not unappreciative. He was not a frightening presence, just a tad supercilious.

It is true that the breeze from the open window in the sitting room could have opened the door, and that William Wissing’s portrait of James Butler above the fireplace was in direct sight line of my bathtub, but I know the Duke paid me a visit.

There isn’t a property in Ireland more deserving of interesting ghosts than Ballyfin. Nestled at the foot of the Slieve Bloom mountains in County Laois, the house is today one of the world’s best country manor estate hotels.  The restored neo-Georgian estate, voted best new resort in the world for 2012 by the Robb Report, is an hour from Dublin and sits on 610 verdant acres with walled gardens, a large lake, grottoes and riding paths.
The house has been ranked as one of the finest homes in Ireland ever since it was first built, in 1823. It served as the country home of the Coote family until 1923, when it was no longer comfortable to be an Anglo-Protestant in Ireland. 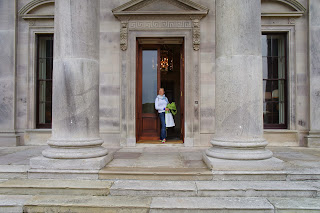 The family sold the property to a Catholic Brotherhood who ran it as a school until they were no longer able to afford the upkeep. It sat in deteriorating condition until 2002 when American Fred Krehbiel and his wife Kay bought the property and began a decade long renovation.
The result is a sumptuous fifteen room hotel, with public rooms decorated with authentic period antiques, gilded ceilings, Chippendale mirrors, significant Irish art and restored parquetry floors.  The library, with a large fireplace at either end, is stocked with 18th century books, as well as today’s Irish Times.  Each bedroom is different, with massive bathrooms, modern amenities and king sized four poster beds.
The Butler room where I slept is decorated in shades of soft rose and cream, with a venerable tapestry above the marble surrounded bath. The in-room bar is stocked with elderberry water and Riedel glasses, organic juices, mineral water, and locally made treats. Stacks of art book sit on the side table. And, I swear, spirits are lingering comfortably in the corners.
This is a house that has seen everything, - from death to deception, from love to betrayal, from wealth to hardship. There must be ghosts. If not ghosts, then some lingering fog of character that hangs in the air and gives a night spent here a haunting resonance.
Don’t be afraid. It’s just history, reaching out to tap you gently on the shoulder.
.
If You Go
Rates: 2013: from May to September, from CAD $815 – $2173, per room per night, includes full board, all amenities of the estate, drinks, laundry, unpacking service and wifi.
Contact
Ballyfin Demesne
Ballyfin, County Laois
Ireland
Tel: +353 (0)5787 55866
www.ballyfin.com
Posted by Unknown at 12:33 PM 1 comment: