Abu Dhabi – The Pearl Of The World 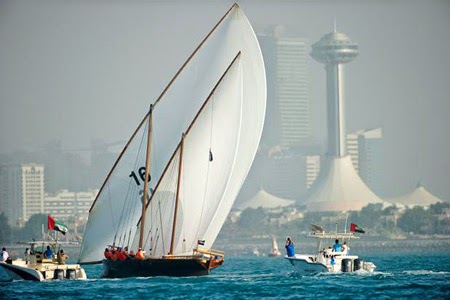 The desert has always been the perfect backdrop for romance-  think Lawrence of Arabia, The English Patient, all the way back to Valentino’s 1921 movie, The Sheik, in which “a charming Arabian sheik becomes infatuated with an adventurous, modern-thinking Englishwoman and abducts her to his home in the Saharan desert”.
So it is not surprising that Carrie, Samantha, Miranda and Charlotte should run away to Abu Dhabi and the deserts of the United Arab Emirates when their New York lives threaten to become mundane, in 2010’s Sex in The City 2.  Its nickname is ‘the pearl of the world’.
While Dubai is the emirate that you hear most about, it is Abu Dhabi, with its more subdued profile, which became the nominative setting for the adventures of the Sex and the City girls. The capital of the emirate, also called Abu Dhabi, has wide boulevards, larger than life architecture and immense wealth.  And right on the doorstep of the city is the immensity of the desert. Perfect backdrop for a blockbuster movie. 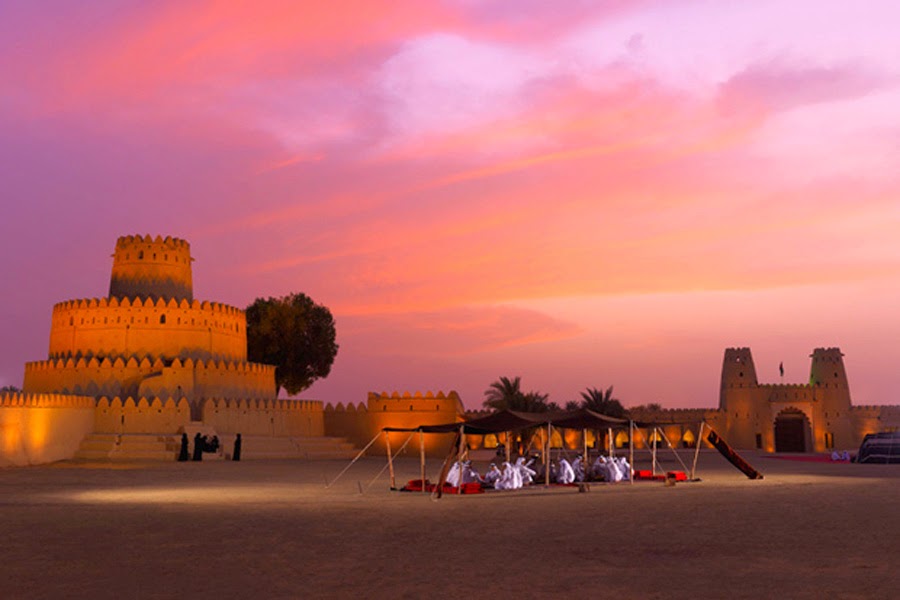 It is a city that confounds categorization.  On one hand there are gleaming shopping centres, exclusive luxury hotels and expensive yachts anchored in the harbours.  This is a very wealthy city and it celebrates its abundance in daring architecture, like the Emirates Telecommunications Company (Etisalat) Building with its gigantic golf ball at the top or the pointy topped National Bank of Abu Dhabi building.  I saw cars parked casually in front of hotels that would make a car lover’s heart sing – and that you seldom see in the real world.  Shops team with gold jewellery, and perfumeries prepare personal blends of signature aromas for their customers.
Abu Dhabi is also home to the seven star Emirates Palace Hotel, the most expensive hotel ever built.  It is a fairy tale hotel, with marble halls, gilded domes, and splashing fountains.  Suites open to balconies that look out on the Persian Gulf.  A private butler greets you with chilled champagne and hands over his card with his cell phone number, to be used “whenever there is a need.” Later in the evening, the bath has been drawn, with fresh rose petals sprinkled on the towels, and more petals beside the bed.  There are 114 domes, 1002 chandeliers, 13 restaurants, and a vending machine that dispenses gold. The ATM-style kiosk monitors the daily gold price and offers small bars up to 10 grams or coins with customized designs. It’s an experience tailor made for a Carrie Bradshaw.
This is a hotel that is a destination in itself, outrageously luxurious, and imbued throughout with the romantic style of the Arabic world. 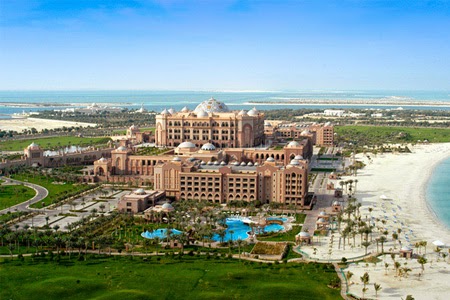 But the ancient world lives on in Abu Dhabi.  There is much reverence for the Bedouin life style that existed in these parts up until oil became the driving force of the economy in the early sixties.  So you can see ancient dhows still plying the waterways.  In the souks, piles of dates, heaps of carpets, handicrafts and spices are offered in shops along narrow ally ways and at makeshift stalls and tables.  The Iranian Souk is one of the most authentic souks in Abu Dhabi, while the Al Meena Souk is the place to bargain for carpets. Go to the Madinat Zayed Gold Souk for good buys on jewellery.    In the fish market, local fishermen display their catch like artwork.
If you leave your window open, you’ll hear the muezzin echo through the city, calling its citizens to prayer, five times during the day.  In my hotel room, inside one of the drawers is a prayer rug and a compass.
There is a concerted effort to preserve the Arabic style in architecture, furnishings, and cuisine.  While almost any international cuisine is available, every corner has cafes and restaurants that offer the special foods of the Middle East.  A traditional meal will usually start with mezzeh, a selection of tasty appetizers, often including tabbouleh, hummus and falafel. Main courses include lamb infused with cardamom, saffron, turmeric and thyme, and the meal will end with desserts made from dates, pistachios, and honey, or muhalabiya, a milk pudding served with rose water and pistachios.   Before the meal, diners are welcomed with dates and small cups of ghawah, the fragrant and sweet Arabic coffee .And after the meal, there’s usually  a hookah or ‘shisha’ to help you relax.  This exotic water pipe bubbles smoke through water, and can be spiced up with flavours like lavender, vanilla, cherry, cinnamon, or orange.
The Anar Restaurant in the Emirates Palace Hotel does elegant Persian food, while the Abdel Wahab, near the Grand Mosque serves a simpler take on Emirati and Lebanese dishes.
While most restaurants, particularly those in the large hotels, serve alcohol, many will not serve alcoholic drinks before sundown during Ramadan, the month long Islamic holiday that requires fasting from sun-up to sun down.   This year Ramadan runs from early August to early September
One of the surprising facts about Abu Dhabi is that less than 20 percent of the population are UAE.  The bulk of the population is made up of expatriates.  That means that the atmosphere of the city is more cosmopolitan and more liberal than one would expect in a predominantly Muslim country.  While it is good manners to respect the conservative mode of dress of the city, most forms of dress are seen on the streets with no problem.  Within hotels and resorts, there are no dress restrictions.
One of the startling contrasts I witnesses was on the beach in front of the Rotana Hotel.  On a lounge chair, a woman relaxed in the shade, dressed in a black abaya that covered her completely from head to toe.  On the adjacent lounge, another woman sunned in a tiny bikini.  Neither one seemed to be bothered by the other. 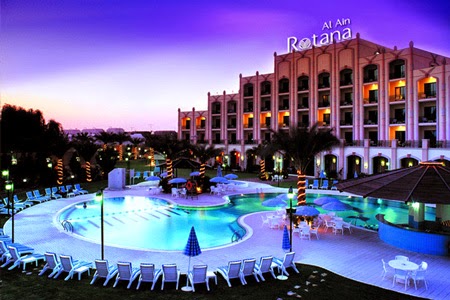 This is a city of beaches.  Abu Dhabi is actually a T-shaped island, connected by bridges to other islands and to the mainland.  There are over 400 kilometres of coastline.  The Corniche, the elegant walking path in the centre of the city, is a favourite place for walking, jogging or biking, and is lined with cafes and shops.  A white sand beach stretches for 2 kilometres along its length, and there are landscaped parks and picnic grounds.
Day trips from the city into the desert give visitors the chance to experience the nomadic life of the Bedouins.  You can visit the large camel market at Al Ain, where white robed locals barter for the best camels, and you can see every size, from babies to full grown, of this ancient ‘ship of the desert’.  You can ride a camel through the dunes, sleep in a Bedouin tent and dine under the stars in an encampment. A popular activity is dune bashing, or wadi bashing, where practised drivers take you on hair-raising races through the desert, sliding down the sides of one dune and skidding up the next.  You can even surf the sand dunes, or play golf on sand links, with a portable circle of grass that you tee off from.
If you tire of the sand, Al Ain, 150 kilometres from Abu Dhabi, is the ‘garden city of the Gulf’, an oasis in the sand and the home of the Royal family.  It is a much more rural city, with a National Museum, the Hili Archaeological Park and surprisingly, an Olympic sized ice skating rink.  me of the best scuba diving in the world is to be found in the clear waters of the Persian Gulf.
This is one of the safest and most cosmopolitan cities in the UAE, and I felt very
comfortable here.  Most people speak English and there is a casual acceptance of western ways, while the life style and history of the desert region has been both preserved and celebrated.
Abu Dhabi is the perfect city to begin an exploration of the Middle East.

Travel Information
The United Arab Emirates is a federation of seven Arab emirates, with Abu Dhabi being the largest, and the capital.  It also has the largest oil reserves.

Canadians do not require a visa to visit Abu Dhabi.
Etihad Airways has three direct flights a week from Toronto to Abu Dhabi.
www.etihadairways.com
Where to Stay:
www.emiratespalace.com
www.rotana.com
General Information:
www.visitabudhabi.ae
www.abudhabitourism.ae

Thank you so much Love your blog.. Avionskekarte

It’s a walking tour of the Old Town in Stockholm, with a special theme. The tour covers real, non-fiction events from the darker, more dramatic and tragic side of Stockholm’s his www.stockholmfreetour.com

Im inspired with the exceptional and instructive contents that you provide in such short timing. best carry on luggage