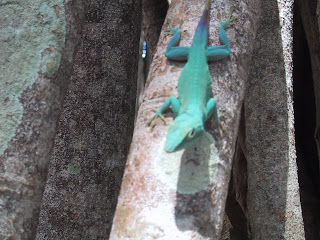 Reptiles from Around the World:

I was admiring the odd spotted bark on an ancient tree in  Bermuda when one of the spots moved.  The little guy above was curious and beautiful, and stayed still long enough for me to take his photo before he slithered away.

He was an anonymous reptile, but in Fiji I met one with a reputation. 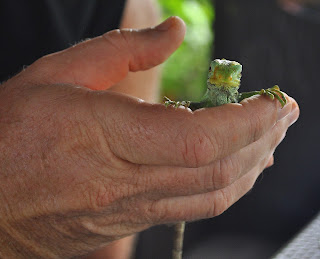 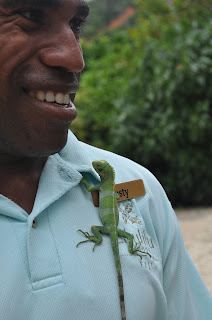 His name is Hector and he’s a rare Crested Fijian Iguana found on the island of Malolo in the Mamanuca Islands of Fiji. He was rescued by the people who work at Likuliku Lagoon Resort on the island and he has attained instant celebrity. Guests spend more time visiting Hector than they do the Spa.  He’s one of a highly endangered species, and he seems to know he’s important. He’ll pose, with attitude, for photographs, and there are many guests who track his exploits on face book. He’s probably the most famous iguana in the South Pacific.

And here's another Fijian iguana, from the nature reserve in Fiji.  This British tourist was a bit nervous about letting him climb on his shoulder. 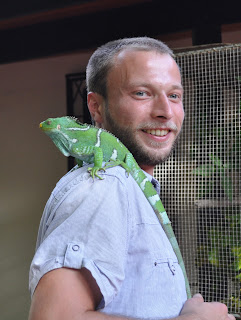 This next one is a resident of Kaua'i and he was artful enough to pose on a flower of bright red, his exact complimentary colour.  Obviously an experienced poser. 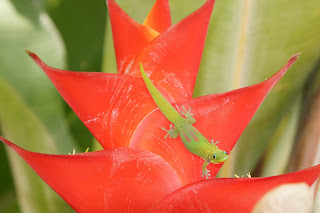 And this fellow with the black tongue lives at the aquarium in Napier, on the South Island in New Zealand. 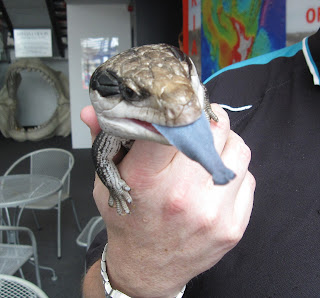 These little guys may be cold blooded, but they sure have a lot of character, and they seem to love the camera.
Keep an eye out for them on your travels.
Next post - It's A Cat's World!
Posted by Unknown at 11:07 AM

The Evening Saga: Splitting Beginning Aspect Two is the second of two loving creature of the night movies that make up the summary of the Evening Tale that I saw over previous times end of the week. All three primary throw associates, Kristen Stewart, John Pattinson, and Taylor Lautner have returned. Strong and possible history breaking company is predicted due to it being the only technology over previous times end of the week. However did it go out with a hit or with a whimper? daily crossword/a puzzle

History of France Bottles of wine - Aspect One introduced us from Moses to present day. Partially two, we are going to fly over the many wineries of Italy and the area they take up. If you have not gone to Italy, you will identify many of the titles you have read on brands. So follow me on this trip of your bottles areas of Italy. First, we will determine the areas that do not produce bottles by illustrating an unreal line from Nantes to Charleville. This band includes Brittany, Normandy and Picardy. crossword answers