The Wild Coast of Africa - One of the World's Best Hikes

TIA – This Is Africa.

From the cosmopolitan beauty of Cape Town to the raw energy of lions in the wild, South Africa is an unforgettable travel experience. 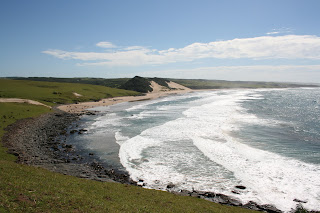 I was ready to admit that I may have made a terrible mistake.  I had lured my friends into an uncomfortable, maybe dangerous, adventure on a whim.
Things couldn’t get much worse. We were somewhere in the Transkei province of South Africa. Night had fallen precipitously, rain and fog were all around us, and the dirt road we were following was a rutted sloppy mess, narrowing by the mile.  Visibility was near zero.
As we drove slowly around curves and over hills, things emerged from the fog and just as suddenly disappeared.
-Two cows and a goat, perilously close to the side of the road.
-Three women, with high headdresses, wrapped in yellow, blue and red robes.
-One large unhappy bull.
-A man in a full length white coat with a green and yellow knitted dreadlock cap.
-A group of men sitting on crates under a light in a lean-to.
Their eyes followed us as we passed on into the fog and the total blackness of a countryside that had almost no electricity.
What had I done?
It had seemed like such an appealing idea months before, back in Canada, planning the trip.  Six of us had put together our ideal three week trip to South Africa, mapping out the places we wanted to see.  I had read about the Wild Coast, an area of the Eastern Cape bordering the Indian Ocean in Xhosa country, the birthplace of Nelson Mandela.  Far removed from the tourist spots, it was famous for its untouched shoreline and the walking paths that looped along the coast, from one small inn to the next.
Despite the long drive to get there, I really wanted to do this hike, and swept the others along with my enthusiasm.  Perhaps I just wore them down, or maybe they thought that because I was a travel writer, I knew what I was doing.
So here we were, and it wasn’t looking good - middle of nowhere, bad roads and utter blackness except for the triangle of our headlights.
And then we drove into the warm circle of light at the Kobb Inn, with the throb of breakers in the background, where gin and tonics and roast lamb were waiting.
We slept in a modern version of a rondavel, the thatch roofed round cottage found everywhere in rural South Africa, and the next morning set off on the walk I had dreamed about.
You know those days in your life that are golden, to which, when times get tough, you can mentally escape?
This was one of those days. The beaches were pristine, untouched it seemed by anyone but the occasional villager, and the cows.  It was strange to see the cattle cooling their legs in the ocean, and sunbathing on the wet sand. 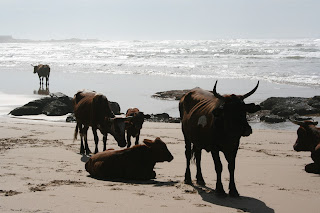 When we approached an estuary that at high tide was too deep to walk across, a little boat manned by a friendly local would magically appear, and for a few pennies would ferry us to the other side. 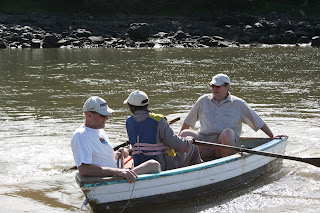 There were no resorts, no strip malls, no stores, no advertising signs.
Later that evening back at the Kobb Inn, we feasted on whole local fish that had been roasted on the barbeque and swayed to the music while ladies from a nearby village performed their traditional dances for us.

The Kobb Inn is the starting point for the Wild Coast Meander, a hotel-to-hotel hiking trail covering 56 km of the southern region of the Wild Coast. The terrain is aawesome in its isolation and natural splendour. Accommodation is provided nightly in the coastal resorts, and guides from local Xhosa communities accompany hikers every day, sharing their local knowledge and customs.

At Trennery’s, further down the coast and near the mouth of the Kei River, we met up with a group on horseback.  Julie-Ann from Wild Coast HorseSafaris, who leads groups on what has been called the ‘best horseback beach riding experience in the world’, told me that the riding tours she leads along the beaches were aggressive but carefully guided, and very popular with European and South African tourists.

So despite its inauspicious beginning, the Wild Coast was everything I had hoped Africa would be. But the Wild Coast is just one very small part of the pleasures of this large country of South Africa.
Posted by Unknown at 10:05 AM