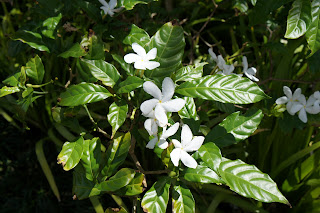 In Kaua'i, you can never forget that the ocean is in charge. The waves throw you over like a toy, soaking you completely when all you meant to do was get your feet wet. At night, the surf is a constant and powerful lullaby that rocks you to sleep. And it lures fools like me into thinking they can boogie board. 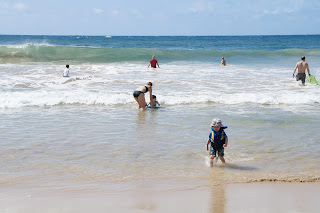 This green island is often called the garden island for good reason - there is frequent rain, warm temperatures and graceful mountains covered in vegetation.
When we first arrived on the island, there was stormy weather, grey skies, turbulent seas and high surf.  There were warnings not to swim because of the unpredictable currents, and one tourist was swept away to his death when he ventured into dangerous undertow.
It was, however, spectacular to witness the skies lit by lightning, the seas almost black, the clouds a smokey purple. 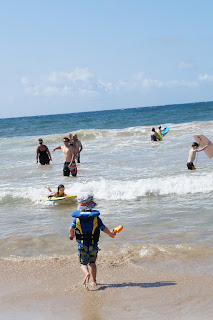 And when the sun came out, the island glittered like a jewel, and the sea was irresistable. My little three year old swimming companion spent hours in the waves, not minding being upended by them, or that they disolved his sand castle as soon as he built them.
Posted by Unknown at 11:42 AM