Another day of perfect weather, and another lovely Spanish city. But this was one of those days when all of our choices turned out to be unwise. Maybe we had just grown over confident.
Because we like to travel independently we decided that we would bypass the cruise line tours and do our own trip to Jerez, the sherry capital about 60 kilometres outside of the city. 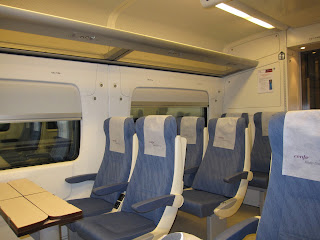 All began well - we found the tourism offices, got the info we needed, and walked to the train station in time to catch a train at 11 for Jerez. Great train, must have been brand new, and an interesting trip that took about forty minutes. 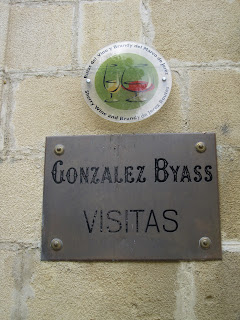 But things began to go awry when we decided that we would tour the Harvey’s Bodega, which seemed to be a short walk from the train station. Not so short a walk, it turned out, and we had trouble finding the entrance. We slipped into an open gate and wandered around the property - nice gardens, great caves full of sherry barrels, but not a soul in sight. Finally found someone who said there were no tours today. Hmm.
We decided to walk to the Tio Pepe Bodega, which appeared to be a short walk on the other side of the city centre. In the meantime we tried to get some money from a bank - we didn’t have enough euros for our return trip to Cadiz. The bank refused to give us any money - something about regulations that had been in place since the time of Franco! And now it was one o’clock and in order to get back to the ship in time for the four o’clock boarding, we had to catch a train at two. Finally found a bank whose machine would spit out money for us, and got enough cash for our return
But, always the optimists, we thought we could still manage a visit to Tio Pepe within the time limits. 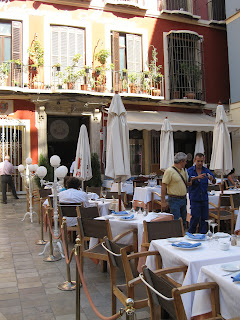 So we walked some more, lost our way, and arrived at the bodega to discover that there would not be another tour for an hour. And now our time was really short - we sprinted all the way back to the station, fumbled with the ticket machine which wouldn’t take our euros, and finally got it to produce two tickets. We slid into our seats just at the train doors closed.
But that wasn‘t the end of our woes. I take full responsibility for our next error. I looked up at the monitor on the train, and thought that we were at the final stop at Cadiz, and we jumped off. Wrong stop. Not only that , it was miles from the port, and it was now three.
We were in some industrial suburb of the city, with no buses or taxis in sight. The next train wasn‘t leaving for over an hour, too late for our purposes.
I may have had a little meltdown. Perhaps I raised my voice. Panic and guilt will do that. But just as we were beginning to think about how much it would cost us to fly to meet the boat at the next port, a taxi appeared miraculously out of nowhere.
He got us to the ship and I would have to guess that we were the last guests to board.
So, happy ending, but I am sorry to have missed Cadiz. It looked like a very pretty city and I have promised myself that I will come back sometime to do it justice. And Jerez too.
The day ended on a happy note - a glass of wine in the Crow’s Nest with good conversation with new friends, and a view of Cadiz by sunset.
Posted by Unknown at 12:21 PM