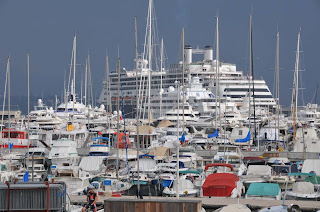 MS RotterdamDay Sixteen: Rough Seas
We seem to be in the middle of some rough weather. Ironically the movie playing on the television today is The Perfect Storm. Is the captain playing with us?
It is still warm , about 79 degrees, but the sky is overcast and there are force eight winds. So the ship is rocking and several people are looking green. Good thing Bob and I are hearty sailors. Running on the treadmill is challenging, though the view is fascinating.
There was a Grand Buffet at lunch, with ice sculptures , really good big shrimp, (No, Miss Al, I didn’t eat any!) roast beef, the whole nine yards, as well as rum babas and triple chocolate cakes. 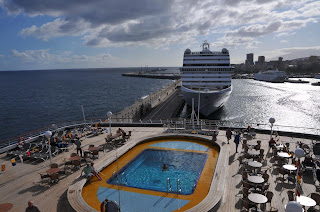 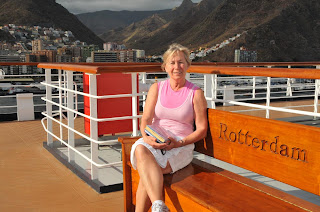 After, we did the audio guided art tour of the ship. There are paintings, sculptures, archaeological pieces, antique ships models - a couple of million dollars worth of art works. It makes the ship far more interesting than most.

I then went to a talk called Five Hundred Years of Art History - a real gallop through the ages, but well done. Bob opted for a talk about navigation in the Queen’s Room.

I have encountered such strong Anti American feelings on this trip, shocking and
nasty. The Brits and other Europeans have expressed real disgust, not only with the country but with the people. Even the Americans are anti- American and fear their country is falling too far behind the rest of the world to ever catch up. The general opinion seems to be that the country is doomed, that Obama will never overcome the goon mentality of the powerful right, and that the reforms that are essential will never happen. The best result would be that America would draw in its tentacles, build walls around itself and exist in isolation from the rest of the world.
There used to be admiration mixed with the complaints about America, but that doesn’t appear to exist any more.

The captain has promised sunny skies and quiet seas for tomorrow.
Posted by Unknown at 9:27 AM